I have taken to talking to chickens. I realize it when, after a morning of reading, naps, and sitting about, I wander out to the chicken coop and outdoor pen to refresh the water and do a little area weeding. I comment on the heat, and the rooster, Sheldon, replies, as if on cue, with a big roostery crow.  I stand up and look at him. He looks back at me, though because of where chickens eyes are set on their tiny heads, he can regard me only with one eye at a time.

Sheldon is not my rooster. He is the darling of ten other chickens, all residents of what I think may be the most beautiful 15 acres in Prince Edward County. I am the house sitter for my friends that are on a trip. I am responsible for the grounds(gardens everywhere), the loveliest Victorian home(if I described it you would just cry), two house cats, and yes, the eleven chickens, until the family returns days from now.

Sheldon and I keep talking for a while. His reply to my heat comment is a bit confusing. I translate it, from his tone and sense of urgency as, "The king approacheth!"  He crows twice more, trying to get it right: "Did you just throw my cat out the window?" and then, "Say, Violet! That's some dress!" I laugh and shake my head. "Silly rooster. 'Can't get my name right," I mutter to myself. One of the hens, the blondish one, clucks at me through the fence, "You know he could have been a someone, our Sheldon." I come closer and bend down.  "What? Sheldon?" "Oh yes. Yes. Yes. Yes." She pecks at the ground then clucks again. "Sheldon is dreamy. If he had arms, he'd be a big name at Stratford." The dark two-toned hen crowds in, "Yeah. Ya can't hold a sword with chicken wings. 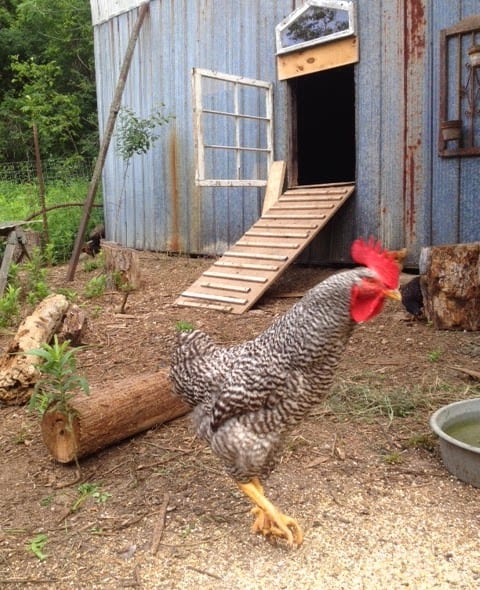 But if Sheldon had the big manly arms he deserves, why, why he'd be a STAR, I tell ya! He wasn't trying' to respond to your comment. He was trying' to show you what he can do! Me? I could a' played Blanche to his Stanley. Him, Sheldon, holding' little me in his big strong arms. 'Makes me positively swoon just thinkin' about it." 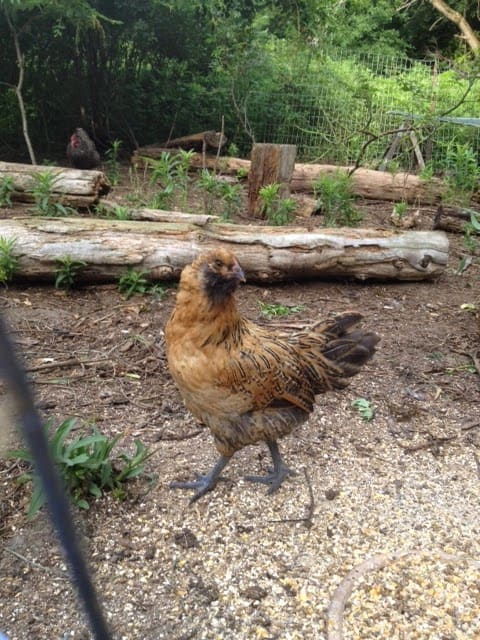 The three of us pause. Sheldon is off under a Sumac picking at a log:
"Alas poor Yorick! I knew him Horatio, a fellow of infinite jest, of most excellent fancy; he hath...hey! A June bug!"

The blondish chicken shakes her head. "Ya see what I'm talking' about? 'Kid's got talent. Big talent, trapped in a ridiculous rooster's body. I'm worried that he's depressed."

I think about Sheldon all day. Around 7:30 I head back out to the coop to put the chickens in for the night. All are already in and roosting except for four younger ones. I go into the yard to try to shoo them in, but instead of fleeing, they come toward me with all these ideas:
"Maybe Sheldon should go on Prozac?"
"Maybe Sheldon should apply to the National Theatre School as a visible poultry?"
"I'm good at writing grants. Maybe we should get him an arts grant?"

"Maybe we should put on a play?"