Leo Tolstoy (not his real name) – Tofino, BC 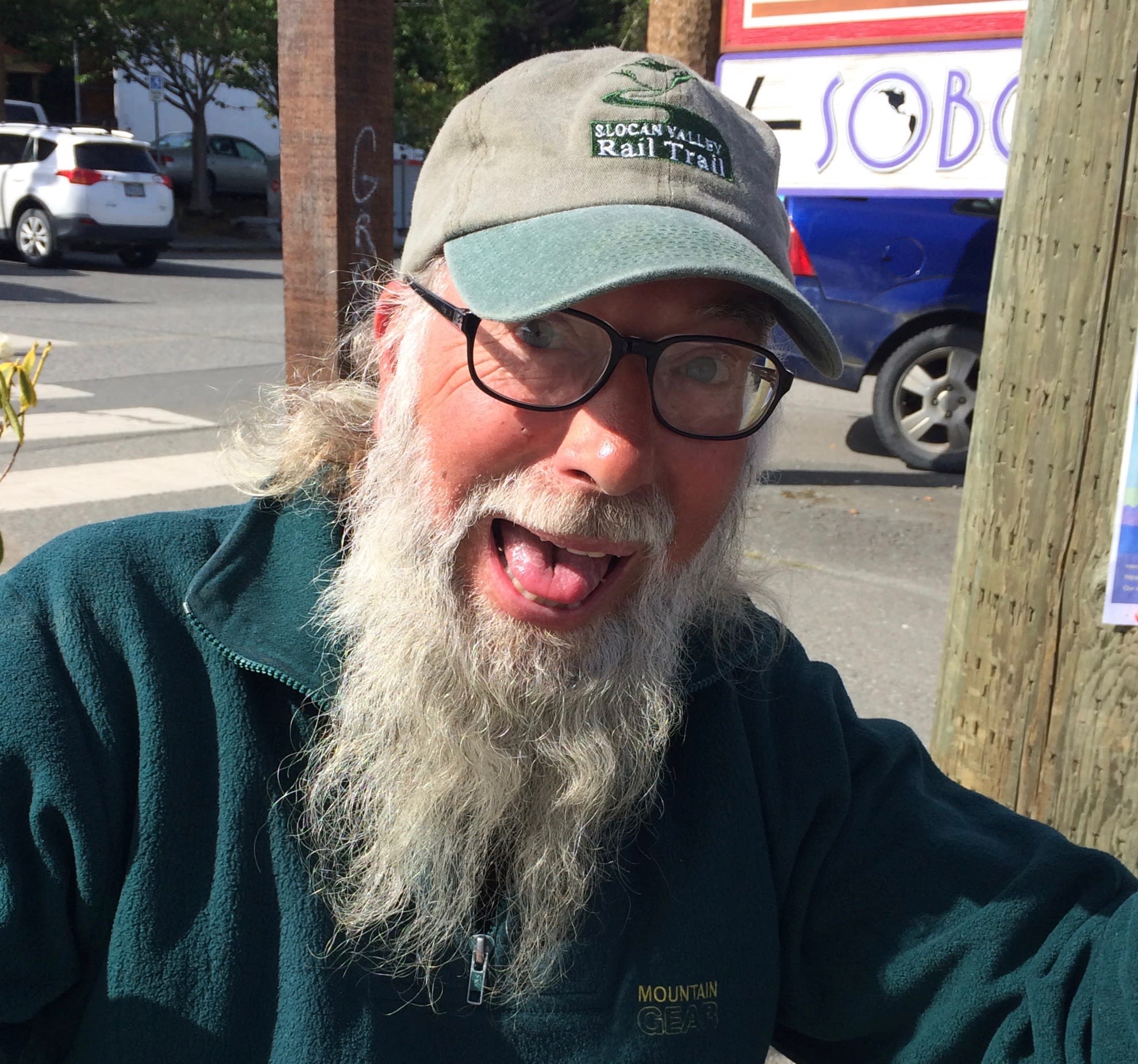 June 13, 2019. I noticed Leo and his gorgeous face sitting in the sun in downtown Tofino. In no time, we were sitting together sharing a wonderful, lively conversation. Leo has a giant heart that beats for humanity and especially this planet were living on. This is clear from his passionate response to the three questions:

“Ah, yes. I am deeply in love. With the planet. I love nature. Being homeless for the last three years, I’ve had lots of time to spend out in nature. So every day, you’re looking at the weather figuring out what’s what. I got my nice canvas tent. And it’s pretty cool–travelled around, go to beautiful spots like here in Tofino, the Kootenay’s , and the Sunshine Coast. The whole Vancouver Island is pretty cool. So–I love life.

You know whatever we can do to save the planet is what we all should be doing right now: drive less…you know you make those choices–you have your little cup, don’t be doing those disposable cups, and stuff. No disposables, and away you go! Right? There’s so many things to do and so many non-profit organizations out there that are doing great work . It’s easy to get involved…community organizations.

This whole capitalism thing has been done to death. It’s definitely not working, especially on a global scale…they just can’t stop themselves. It’s a ‘greed’ culture. And here in Tofino, you’ve got very strong First Nations, you’ve got Meares Island over there.

All that forested thing? That’s where they get the water for Tofino from. They were going to clear-cut it, back in 1984. Yeah, MacMillan-Bloedel, the biggest forest company in Canada at the time and government approved, all approved, the plans are that we’re going to clear-cut the whole thing and the First Nations stood up and said, ‘No you’re not!’ And they said, ‘We’re going to arrest you.’ And they said, ‘Go ahead and arrest us ALL.’ So they kind of started the thing of saving the water-sheds…trying to save watersheds all over and they’re still clear-cuttin’ like crazy and it doesn’t matter–NDP, Liberal, Conservative: they’re all the same…what you paid to get into power. You sell your soul, and supposedly they’re compromising for jobs versus the environment bullshit story.

There’s no jobs in forestry anymore. I mean, they’ve closed down ninety percent of the mills in B.C. since the 1990’s–shippin’ raw logs. You know, there’s no value-added. They’ve got these giant robot grapple-yarders that go up there and just snap these thousand year-old trees. It’s terrible, terrible. Gotta stop that. Yeah, so Tofino’s a magical place. Very important.

So, anyways, what else?”

“There’s so many. Yeah, so Leo Tolstoy for sure–my namesake, because I’m one-hundred present Russian-Canadian-Dukhobor stock. The original peace-freaks. We got our asses kicked all over Russia for three hundred years, from 1652 until 1898 when Leo Tolstoy and the Quakers helped to save our butts and get us to Canada. And so we all landed in Saskatchewan and were communal farmers, vegetarians.

Uh, Christians but don’t believe in churches…think Jesus Christ was not the son of God, but a good man, a very good man and lots to be learned.

Great singers, they’re all…the Dukhobor choir…if you ever go to the Kootenay’s–borscht everywhere! It’s so great!

So Leo Tolstoy for sure. I’ve read War and Peace, I think twenty-five times, like regular therapy every couple o’ years–‘Let’s read it again!’ You get a good translation, it’s awesome.

There was also a guy, when I was the communications director for the British Columbia Internet Association, back in the mid-90’s. You’re getting all of these free nets and little internet service providers to, you know, help coordinate conferences and stuff–hooked up with a guy called, Ed Oscapella. He became our executive director. And Ed’s claim-to-fame was, in the early 90’s the Vancouver Symphony was bleedin’ red ink all over the place and they needed to do something and Ed’s kind of a musician/entrepreneur, well-connected kind of guy. Super smart, heart of gold, but just a real good community-builder kind of guy and so he was quite interested in the internet–knew nothing about it. Anyways, so what he did, he totally resurrected–saved the Vancouver Symphony by doing outdoor concerts, like on the top of Grouse Mountain, Stanley Park, that kind of stuff. Totally turned it around. And then he got invited to come to Victoria. I spent most of my adult life in Victoria. And he showed up when we were trying to organize this internet organization and he was responsible for all of the opening and closing events…the Commonwealth Games in 1994. And that was a great show, and a great party and uh, lots of First Nations involvement. And so after that success, he was looking for something else to do and he’d heard about us trying to start up this internet lobbying kind of  group, right? We were going to save the world on the internet, right? It would be wonderful. And he didn’t know how to use the internet. He didn’t know how to use email or anything so I taught him. I did the email etiquette guidelines for the Ontario Government a few years before that, ’cause it’s just like Facebook and all that, if you start flamin’ each other it’s not going to work, right? So anyways he was a real quick study, and so yeah, the organization–we had a great run for almost ten years. We’d do conferences every spring and fall somewhere in BC right? And it was ‘leading edge–what’s going on with the internet.’ So, it was amazing. And on Earth Day 2001 he died.” (Leo’s voice falters here) “He got lung cancer. He had a couple young kids, and he never smoked a day in his life. And it was just like diagnosis and four months later, he’s gone.

Ed Oscapella if you look around for him…his brother, sometimes you hear him on the CBC. ‘Eugene Oscapella,’ or something. He’s a communications guy in Ontario somewhere like Ottawa. Very interesting.  Another big influence was Rainier Giannelia. He was like on of BC’s original internet pioneers doing these wireless shots…based out of Terrace and hooked up all these, kind of Northwest BC, a fifth of the province, right? These super-cool, you know, using CBC radio towers…line-of-sight, amazing right? And his brother, Rainier Giannelia’s brother was the guy that architected that giant bridge in the Maritimes, the one that connects PEI…the Confederation Bridge. It think his brother was older than him so Rainier was always trying to, you know, ‘You just wait. I’ll show you!’  Connect the entire province here. I’ll be rollin’ in dough. And Telus killed his business, like they did all the little ISP’s right around 2001, so now you have no choice right? You’ve got Shaw, Rogers, Bell, and they all price rig , and the CRTC…it’s not good. So there’s a couple of…Tolstoy, Ed Oscapella and Rainier Giannelia. Oh, there’s more! John Savage from the Gold Trail School District, and Ashcroft near Cache Creek–fantastic guy. He was doin’ it from the school district, connecting all the schools and originally, like the shop teacher form one of the schools. Just a brilliant communicator, community-builder…workin’ very closely with the First Nations up there. They were the ones who needed it the most…they’re on these beat-up old roads. Takes hours to get anywhere. He’s pretty cool . I better stop.

“You have to have hope. I’ve been doin’ this thing, you know, this homeless tour for three years and I’d started out, an old hippy. I grew up in Vancouver in the 60’s and 70’s right? So I just, ‘Peace and love, baby! Peace and love!’  So I’ve been doin’ that, sayin’ love and peace, and puttin’ on interactive, community at projects, free, like, ‘come on down! Love, peace.’ And I’ve had numerous people on my travels of the last three years…’yeah, man, I totally agree, love and peace, love and peace, but there’s no hope.’  So that’s not a winning attitude. And that’s not going to save the planet, right? So stop it! Come on!

It’s…we’ve gotta get going here. You’ve gotta have hope. You’ve gotta have faith. And lotsa love and peace, right? Don’t’ be forcin’ people right? It doesn’t work. Peace and love. War sucks. Violence sucks. Coercion sucks–it’s waaay harder than peace. So do it! So I’m hopeful. So much of the mass media is, ‘Armageddon! Armageddon!’ Like, I spent my last five years of my working life as a technical support guy with Shaw Cable. You know, I thought you know, of all the Tel-Co’s that they were the least reprehensible , but it turns out that they were just as bad as the rest. Anyways, so, I don’t know where I was going with that….Oh, so because I was a Shaw employee, I got a great deal…all the channels, HBO…Game of Thrones, all this crap right? And most of the people are like half my age that work there and most of them obese–just terrible from like the slurpee’s and McDonalds. Terrible, terrible, and they’re all ranting about the latest Game of Thrones right, and it’s like, you know, we could stream–we had all that stuff.

My kids were in their teens right, so we were streaming and like wasting whole weekends steaming every episode of ‘Lost,’ or all the things and it’s garbage right? It’s violent, coercive…you know Game of Thrones has more rapes and murders than any other thing that was ever done, but it’s just hype, like all this Hollywood right? Star Wars? Really? Like how sequel, prequels do we need? And it’s not a positive message, right? It’s violence is the answer, you know–Big Brother–all these shows–even the cooking shows; instead of cooking being a wonderful thing, it’s competition, you know, right? Only one wins, everyone else loses right? That’s not my experience with life, you know. So, yeah, so definitely, turn it off. Turn anything that’s hype and if you’re lining up to the Raptors tonight, you know, like, good luck with that. Just turn it off. Go to the beach. Start replanting forests. You’ll have way more time. The average Canadian still, you know, watch four to five hours of regular television, and now with the streaming and screen time, like my kids are in their early twenties, right? Just like checkin’ their phone a hundred times a day. So just turn it off. It’s noise, right? Signal to noise ratio…I’m a network guy right? It’s always like ‘oh, the network seems very sluggish today. Well, what’s it’s signal to noise ratio? How clear is the signal, right? You’ve got too much noise and you hear this all the time, people going, ‘yeah, yeah. I’m so busy. I’m so stressed. I gotta pay the mortgage. I gotta go to work. I gotta drive the kids to school,’ you know, like geeze.

Slow it down. Slow it down. That’s how you save the planet, right? Just slow it down. Don’t be jet-settin’ to Bali and all of this kind of stuff and savin’ up your Airmiles. And boycott the Fortune 500. Like nothing that’s advertised on TV…you don’t need. You don’t need your brand new F-150. You don’t need all the stuff, you know so much of it is just made out of plastic, planned obsolescence, consumer society. They keep callin’ us consumers. We used to be called ‘the public.’ And now it’s like, ‘smart consumer.’ Consumer. Consumer, well, I don’t know about you but I’m a producer, aren’t you–writing? Don’t you produce things? Don’t call me a consumer. Like what am I, just a lacky to whatever McDonalds tells me to buy or something?