My Honest Wish for You

It’s the awe factor, I think–this feeling of witnessing something remarkable, beautiful, that nudges a starving part of ourselves.

I miss my tent. Specifically, I miss the glorious reveal of the day it offered each morning that I used it during my trip across Canada. No windows in my little nylon bubble of comfort. The only clues of the world outside were the sounds of the wind, water, and wildlife, and the light levels. Light levels were tricky. Most of the areas where I pitched my tent were treed.

Initially, I fell for the shade they threw, and assumed the day I was unzipping myself out to, was duller than it was. There were, in fact, no dull days, not out in the woods. Once I learned this, I found myself excited to throw back the fly, and see what the night had made. It was like having the stage curtain pulled back in front of a set at the beginning of a play. Even in the rain, I stood, delighted, content, breathing in the soft, forest air, and wishing that time would stop so I could stay there, standing, watching, drinking a bottomless cup of coffee forever.

It’s the awe factor, I think–this feeling of witnessing something remarkable, beautiful, that nudges a starving part of ourselves. I felt this each time I got out of my tent in the morning: several nights in Lake Superior’s Agawa Bay, Lake Louise, Tofino, the Kananaskis Mountain Range, and Dinosaur Provincial Park, near Brooks, Alberta. To be honest, most of the houses and motels that I stayed in while crossing the country, had great views: PEI, Gaspé on the eastern side, and Quadra Island, off of Vancouver Island, on the west, but the process of looking out a window is different than throwing back the tent fly; you’re part of it when you’re crawling out of a tent–hot, cold, rain, or snow. There’s a tendency toward quiet that comes, and reminded me of seeing the Lincoln Memorial, years ago. Everyone in the room was whispering, if they were speaking at all. 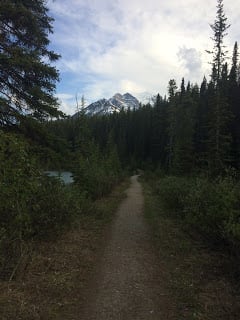