Standing Rock: The End of Complicity?

I attended Toronto's Standing Up with Standing Rock: Solidarity March on November 5th. I was not sure what to expect. I had been following the North Dakota Access Pipeline Protest (NDAPL) on social media (because mainstream media coverage has been shamefully timid) and felt moved to participate in this march. I mean really moved. Like I could not look at myself in the mirror if I didn't attend.

The march, along with others throughout North America, was organized to peacefully support the Sioux Nation in North Dakota, joined now by tribes from around the world, protesting Energy Transfer's pipeline as it threatens to bludgeon its way, uninvited, through native treaty lands including sacred burial sites and then under the Missouri River, the community's water source. The appalling behaviour of the militarized police force-on-steroids against the peaceful, prayerful efforts of the native community to simply protect its water and sacred sites, is mind boggling. 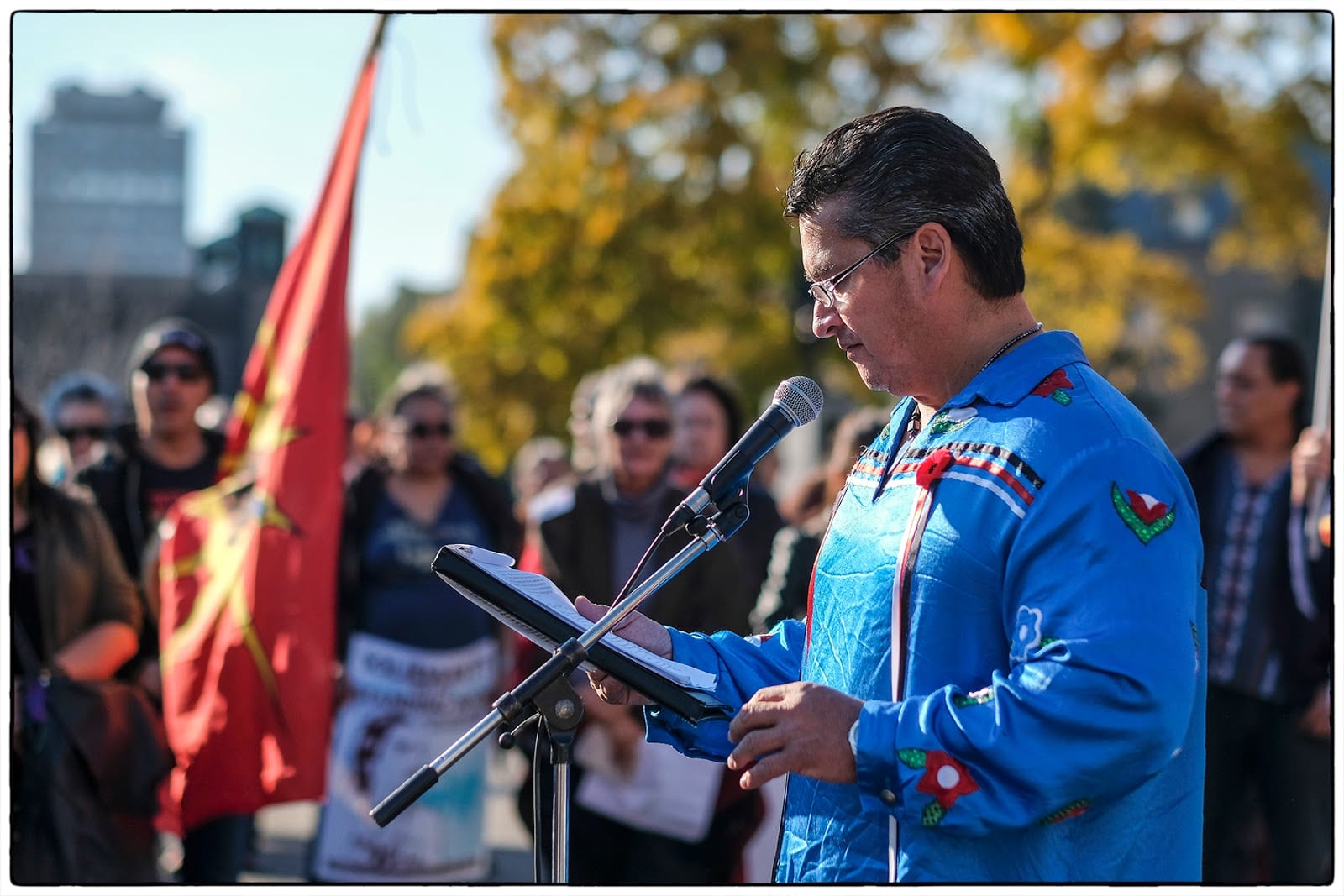 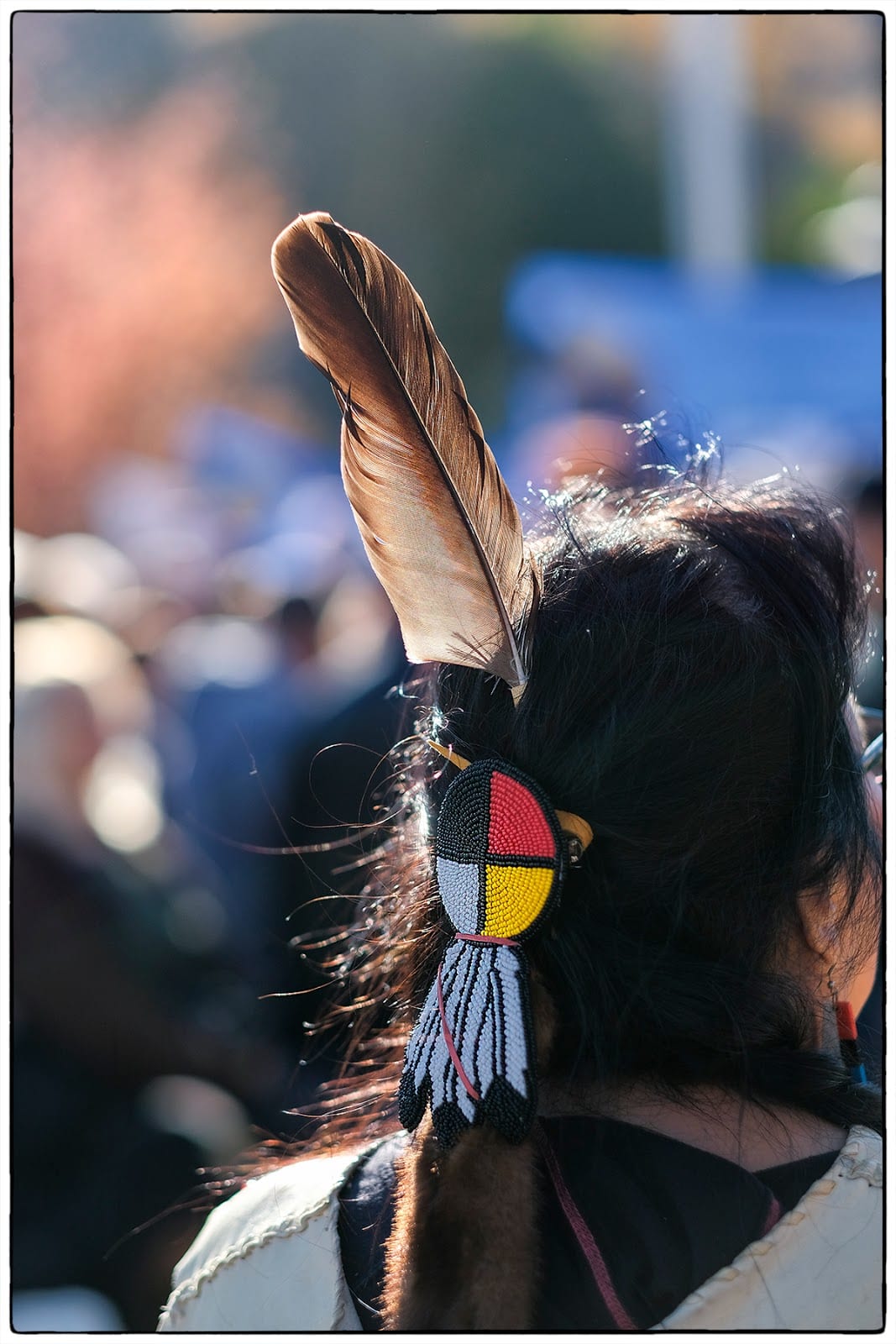 The fact that the pipeline route was shifted from the mostly-white town of Bismarck, due to their concerns about potential pipeline leaks, to the Dakota Access land is brazenly insulting and racist.

So, yes, I wanted to show my support because I can't stand this anymore.

My photographer friend and I showed up an hour early for the event and were worried that attendance might be slim. By the time the event started, there was little room to maneuver. There was a significant gathering estimated at close to four-thousand people; a vibrant show of support.

Several speakers opened the event. They spoke of the fact that this march was not about hate, but only love.

"This march is peaceful. It's going to exude so much love!" ~Elder Pauline Shirt, of the Plains Cree, Red-Tail Hawk Clan.

There were descriptions of the ties and responsibility that we all have to the water and the earth. There was a speech about the power and importance of women and their likeness to mother earth.

There was a poem about the sacred trust that is our treaty to care for the planet. And there was continuous praise for the Water Protectors, the natives facing the police and enduring at Standing Rock.

There was the smell of sage burning, and the heart-thumping sounds of the drummers on their own and with song. The march began, led by a group of elders. I was helping my photographer friend shoot without bumping into people so I got to watch from the sidelines. I saw a strong native community woven among others of all colours and persuasions. There were children. There were grandparents. There were homemade, and printed signs. There were drums and rattles. There was sage. And hope.... 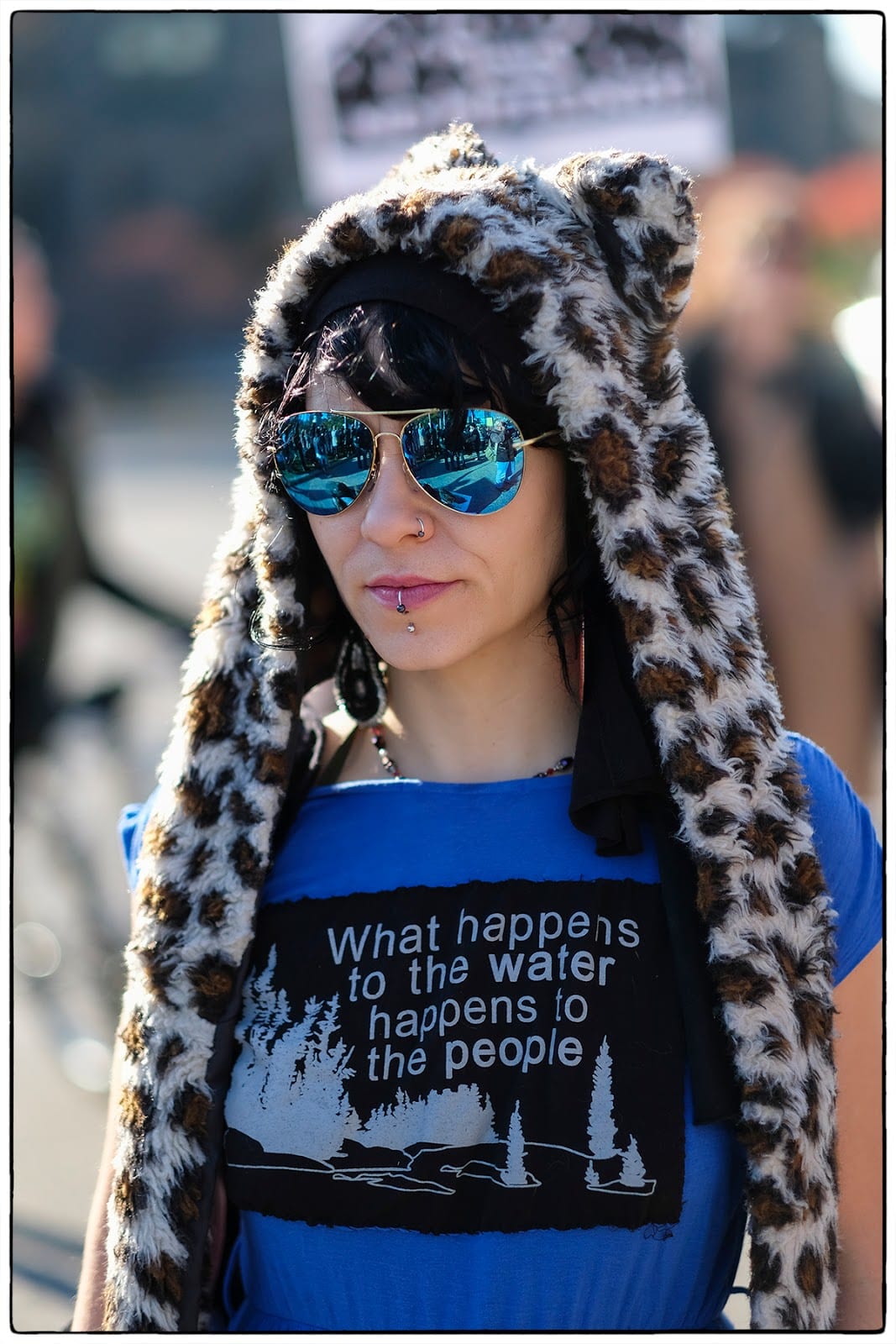 To say that this Toronto march was a peaceful event is like saying that Louis Armstrong was entertaining; it falls anemically short. From the opening speaker to the final circle dance at Nathan Phillips Square, I felt a powerful, almost overwhelming positive energy...

I joined the circle dance at the square. This involved a line of people holding hands that was so long, it circled the square twice. We moved to the sounds of the drummers. I didn't know my hand-mates, but we talked as if we were friends. We talked about how powerful the drumming was. We smiled. We hooted and clapped as the circle drew tighter around the centre. I felt energized and more emotionally in-tune than I have in a long time. You get that many people together, opening their hearts and praying for change, and it's probably difficult to avoid such a feeling.

The oppression that the native community has had to endure is unforgivable, here in Canada as well as, well, the world-over, and yet...AND YET, its members are graciously confronting the intrusion of the Dakota Access Pipeline,

with non-violence. This show of bravery and dedication to the earth, contrasted with the line of police-thugs who are intimidating and harming on behalf of a private oil company, illustrates clearly how bad things have become.

If we are smart, we will join in and take the native lead, making our water and the earth our priority over irresponsible extraction and greed. I see this as the only possibility we have of leaving a habitable, beautiful planet for our children.

I hope this is the beginning of change; the end of complicity.

I hope this is the beginning of a wave of shifting ideology about what it means to be a human on this planet.

I was honoured to be a part of the Standing Rock Solidarity March and I support NDAPL. I want change.