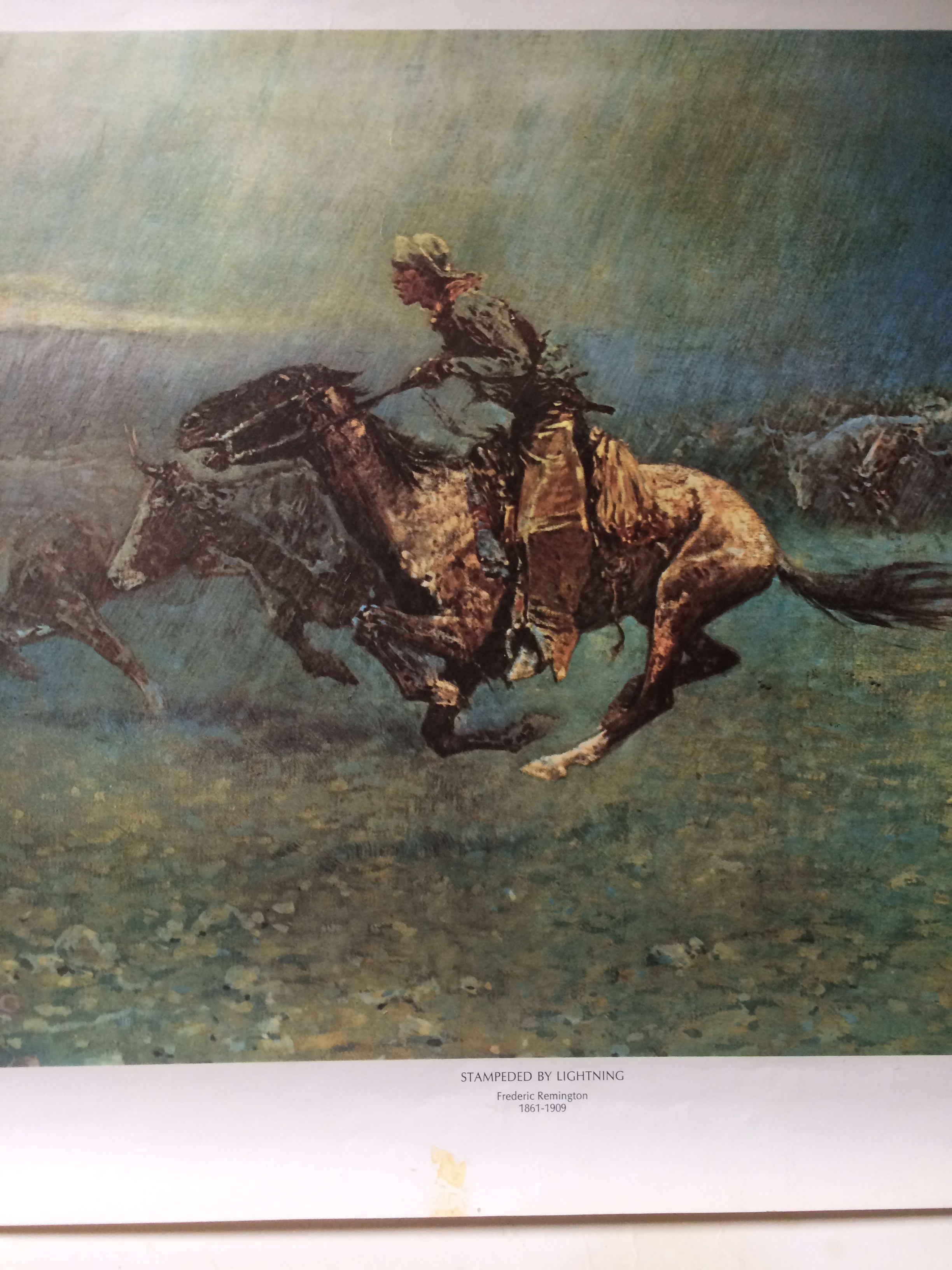 I’m gradually decluttering in preparation for a possible move. On this particular day, I

took down two unframed Remington prints from my bathroom walls. One print,

mirror, and the other, a painting of a solitary fella on horseback, was on the left. Both

prints had the action directed ahead, so their drama continued deep into the silvery

abyss of the mirror while I stood in the middle flossing my teeth. The drama gone, I

stood in front of that mirror and gasped out loud. I did. It was as if the bleakness, the

starkness of the walls reached in and throttled my spine, sent an electric shock into

my brain. The involuntary sound that I made hinted toward ‘panic attack.’ Right away, I

pulled two unframed canvases from a pile, both studies in bold colours that I liked, and

pinned them up on the walls where the western drama used to be. I calmed down

almost right away, but what the hell was that all about? After some consideration, I

figured that without the paintings, the only subject in the view was me, and oh I am

still a work in progress.

I avoid mirrors. I’m not lobbing that out for pity. Yes, I examine reflections specific to

the job of the moment: I’ll get up close with an odd over-grin to seek out bits of kale or

other freeloading food shards stuck between my teeth. I’ll tilt my head to take a run at

arranging my hair after a shower so that I look less like I’m living under a bridge, but I

rarely gaze at my whole head for anything longer than a second, and only to make

sure that it’s still attached to my neck. I don’t like the experience, plus I don’t have time;

I am still overwhelmed with the life-long effort to match up the goofy, eye-rolling,

me like Neptune’s trident­–with the reality of the present. Seeing my reflection in the

the world itself is true–even the insanity of the past couple of years, when in my head,

I was supposed to have achieved, was true. If I had found “the thing,” was living it

within the markers of societal norms, and I wasn’t so damn curious about everything–

why we’re here, who we are, how love and meanness exist on the same planet–

perhaps this truth wouldn’t rattle me so much. If I didn’t have this drive, I might not

feel like I was missing something and had to spend every moment trying to find it.

One great clue I have around this innate drive is my habit of replaying podcasts, or

movies that feature either strong women, or philosophical lessons in step with where I

am. A good example is the recent New Yorker review of a new biography of Nora

Ephron, written as copy, but also narrated out loud on the website. As of this writing, I

have listened to the piece probably eight times or more. The piece itself examines the

idea of people, first wanting to be Dorothy Parker, as Ephron did, and then later, others

wanting to be Nora Ephron, as I did. Her story made me wonder what it would have

table. Initially I listened intently, then the speaker took on the attributes of a good pal

there in my apartment as I did whatever. I know the conversation is one-way, but the

medium is a relief for me: Inspiring. In my wheelhouse.

It’s not only Ephron(we’re here for you Suzanne). I’ve replayed the Chef’s Table,

episode about Nancy Silverton more than is likely normal. The thing is that in my case

with Silverton, it’s not that I secretly desire to be a baker, though thanks to her I make a

stellar pizza crust, but it’s that “she’s okay.” She met her challenges, and she’s okay.

With Ephron, yes I would like to find success with the written word, but what I value the

most in both women is their strength along the way. They were/are strong women

who took opportunities. I know there’s no point in reviewing the past, but if I had fully

tucked into and endured my first real gig at the enormous, industrial public relations

firm where I worked, I would be retired right now. The last PR piece that I wrote was

about construction fencing, and you know there might have been some gasping way

back then; that was soul crushing work.  Neither Silverton, nor Ephron would have let

me quit with my hat-in-a-hurry like I did, but rather I imagine them helping me plan my

egress better. They would have helped me make wiser choices, you know, like

developing a plan. One of them would have phoned, all concerned, and then both

would have rushed over with a bottle of wine and loads of wisdom. They would have

won my trust and I would have listened to them. That’s an unhelpful, pointless past

fantasy, I know. The present one has Ephron reincarnating on my balcony, storming in

through the sliding glass doors, grabbing me by the elbow and taking me to my better

life, all the while asking me what the hell I was thinking in moving in to take care of my

mother. Why didn’t I just eat silica packets? Why not chew an electrical cord?  She

would not have gotten herself into the predicament I am in presently. Silverton neither.

Women need other strong women in their lives. If the mother does not fill this role,

you’re at a deficit, pooched unless you realize it before it’s too late and source a proxy.

Ephron, and Silverton are my magical supporters, and here I will admit that there have

been others: There is nothing wrong with thinking of Kathryn Hepburn to help you walk

into a room. Meditating on Athena is never a bad thing, and don’t get me started on the

positive power of Serena Williams.  We all find inspiration in our heroes, our gods;

that’s why they’re there.  I look forward to real people, ones meant to journey on with

me, but right now, Silverton and Ephron are okay.  You do whatever it takes to stay

sane in order to answer those big questions that you can’t ignore, that keep calling to

you. Essentially, I think the goal is to be able to look deep into the mirror and

acknowledge your deeper Self, here in the truth, on the path.  I’d like to do it without

kale in my teeth.