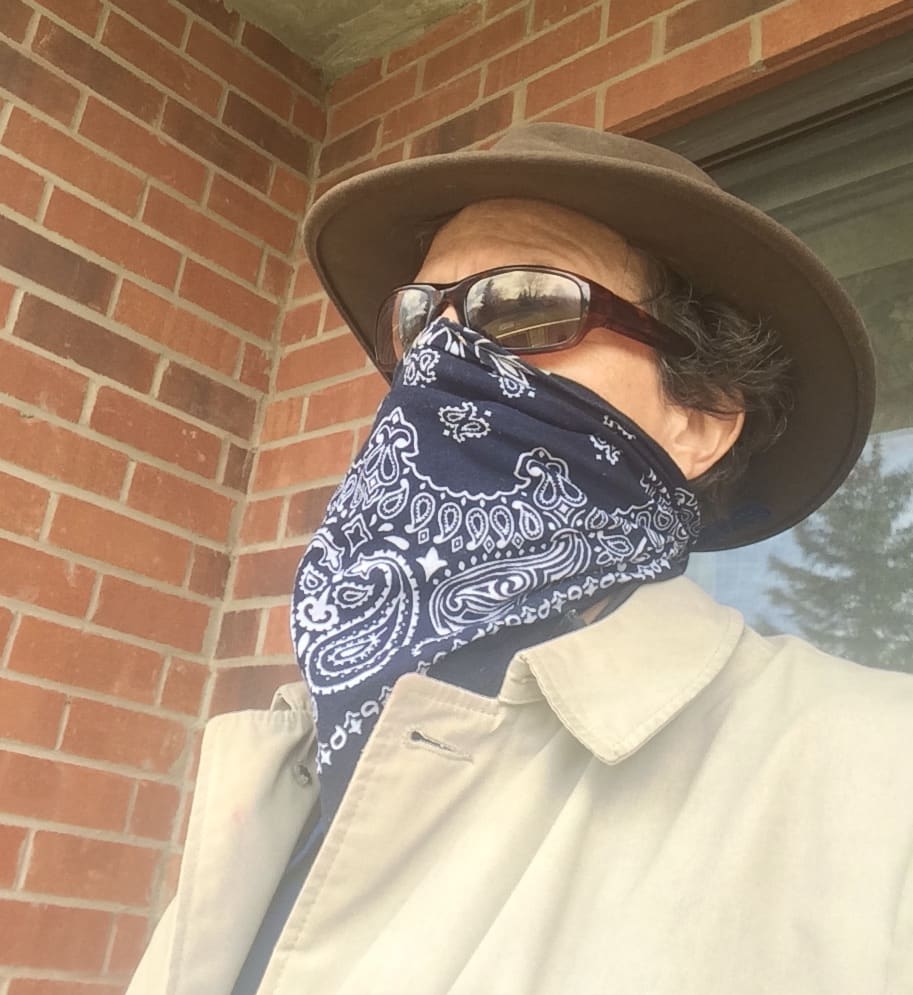 Behold the glorious bringer of ice cream and cigarettes that I have become, pounds heavier, wild eyed and sporting a kerchief as mask. This is me in my fashion, my shifting ontology during the pandemic, charged with ensuring that my elderly mother has everything that she wants. She is no longer eating steaks or significant cuts of meat, but instead has relented to the softer mediums of egg salad, yogurt and cottage cheese. Even tuna salad, now, is going uneaten and left to morph into the colours of the rainbow if I don’t monitor her fridge. Necessary ice cream, enabling cigarettes: one brings joy, the other brings the holy sacrifice to an invisible, relentless fucker of a monster, enthroned inside its coughing host. I invite mom to dinner most days so that I can be sure that she gets at least one good, solid meal–the smell of cigarette smoke in her apartment too nauseating for me to eat with her at her table and loiter with her afterwards. She doesn’t always accept my invitation. Then there are other days when I don’t invite her because I am, not just empty, but stressed with the outer world on top of my own inner faltering momentum and running at a hollering, echoing deficit. I don’t dare let this rest–God help me if the needle gets stuck on this measure–instead, I panic, and hunt for a way to shift myself into a better gear.

A recent treasure from one of my hunts was an essay that I listened to, on The New Yorker website from the May 11th issue, entitled "Reinventing Grief in an Era of Enforced Isolation." The author, Lauren Collins, wrote about the logistical complications of supporting, and mourning her father’s recent death in this pandemic, the story made more heartbreaking by her description of her good relationship with her parents. The death was "complicated by the covid virus, not caused by it." The essay itself was timely since one of my stateside cousins had lost her otherwise healthy, active husband to a brutal, brawling fight with covid on April 22nd. More recently, our kin toasted the passing of an uncle, late in years, felled by cancer that had chipped away at him, worried at him with the relentlessness of a woodpecker. Us cousins, spread all over the continent, were texting and settling in on social media platforms in the best efforts to end-run around our inability to gather to mourn properly. The scenario is ridiculous and painful, surreal that there exists a heart emoji available to let someone grieving know that you have them on your radar, at least, until the time comes when we can gather.

Collins’ story was compelling in itself, but what I wasn’t prepared for, as I listened to the audio version of the Collins’ essay, was to find myself moved by the power of the reader’s voice. It was a woman’s voice, Samantha Dez, from what I could make out in the introduction. Initially, I listened for the words, and then found myself replaying the piece simply for the sound of her voice–it made me well-up. I felt an unmistakable heaviness in my heart and then, yes, tears. It was the thought, the fantasy of me having a conversation with someone who sounded like that–another human in this apartment who, in my head, was thoughtful and purely ensconced in the moment without agenda; different than struggling to talk to my mother which is like pouring soup in a colander and expecting to get something out of it. I starve. There was a pacing about the voice that reminded me of that laid out by the good authors in the books on my shelf– the covers worn and bent from me simply holding on to them, where I have found comfort in the past, settling in between phrases lit by amber lamps while I sat on my couch. It’s no surprise that in that first moment when standing in my kitchen listening and feeling my heart tug at the voice, I felt that it was an essential mother figure that I was lacking, but also, perhaps, a significant ‘other’–a deep connection with another human being. God damn it.

It’s not as if I haven’t been aiming toward this possibility, some kind of fulfilling life full of connections, shaped, nurtured,through constant effort and work on my deeper self, well-aware that I am flawed, far from perfect. Some proof of this effort is that for the past ten years, I have often written letters to whichever therapist I was working with at the time. I started this while doing ground-breaking, and sadly, marriage-breaking work with a professional who had helped to discover and support what Jung would call, ‘individuation’ that, yes, changed my life. In consideration of strict rules around the college, the letters were not responded to but instead, were discussed in following sessions. Why bother writing them? I had gone back over my journals and noticed the tired repetition of the themes of loneliness and lack of direction and felt that the journaling process was only further cementing my predicament. Writing as a process is powerful for me and I realized that if I was instead writing to someone I respected, of a certain gravitas, that I would work to be accountable and avoid weaving the same old phrases. With that in mind, I seemed keener to change my life in order to truthfully write about great gains. It is as if, in a way, I am writing to someone with the voice of that New Yorker reader, an ethereal persona, a kindly, non-judgemental seraph and am matching with like pace and tone from my end because I don’t have to put on a show or defend myself. I don’t write these letters every day, but when I do, and the words flow, I am able to access something meaningful, a discovery that moves me ahead. As I know most people only in fleeting, or distant friendships–and as my mother, who talks to me as if I am an acquaintance and can’t seem to ask for ice cream without making me feel guilty–it has become clear during this isolation that my deeper self is hollering for this basic profound connection. I thought I could manage on my own, but it is clear to me that without it, I am sure that I will break. I can feel it.

The experience of picking up the expected two tubs of Bordeaux Cherry ice cream, three packs of cigarettes, and hauling them through bleak, wind-swept parking lots either in my van or on my bike, feels like something from a Cormac McCarthy novel; I am untethered and invisible in this moonscape. I’m used to life on the edges, but it is this realization on a cellular level of how much I am lacking meaningful connection that is concerning. It is doubtful that I am the only one. This isolation is setting for unavoidable self-examination, and in that, there is the associated unavoidable challenge of tending when you discover those parts of you fragmented and in need. This is not easy.