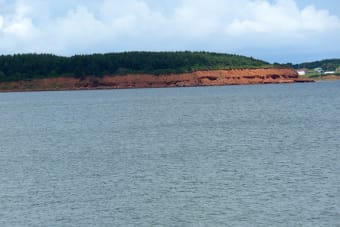 I composed an apology for it on a piece of hotel paper and left it beside my little towers of money in an attempt to not be a dick.  “Excusez-moi pour les coins,” I wrote.

I almost didn’t make it. I nearly abandoned this ridiculous sprint to the Atlantic to complete my cross Canada adventure. In the dark of night, alone with my fatigue, and the scattershot pattern of black fly bites–my souvenir from one rest stop near Pembroke, the matronly, pinch-faced part of my psyche was explaining to the whorish, curious part, why all of this was a bad idea and that I should get back to Uxbridge–hide behind my locked door with the pennies that I had left. I figured that, yes, in the morning, I would check out of the overpriced hotel in Quebec, and skitter back home. I didn’t though. When I woke up, my Oh-for-Christ’s-sake, part of my psyche suggested that the matronly part go take a flying leap.

It’s scary doing things on your own at times. In my case, there come the familiar waves of second-guessing, churned and goaded by stiff-breezes of over-thinking on top. It’s like sunbathing on Overwhelm Beach.  I can’t ignore these feelings, but I’ve learned to wrangle them into perspective so they can’t create the perfect storm and wreck everything. In this case, opposed to the magnificent scroll of reasons to bail, I began to picture the giant clot of regret that I would carry for my remaining days if I chickened-out. I mean, this clot was going to be huge, ugly, and relentless:

“You were almost to the coast when you got all responsible and dull. Good timing, idiot.”

I don’t want to get all precious, but it was a line from Rumi that made the difference:

“The joy of being human is in uncovering the core we already are, the treasure buried in the ruin.”

Rumi makes no mention of clots of regret anywhere, plus it's ruins, not apartments. Hiding is no way to discover anything, so with this, I figured that turning back was not an option. It's helpful to have a thirteenth century mystic along with you on the ride.

I felt better–all puffed up with a regained sense of self, and vowed to maintain this sunny sensibility for the rest of the journey to the shore. I started by leaving a tip for the hotel housekeeping. I didn’t have bills, so had to leave a bunch of change. I composed an apology for it on a piece of hotel paper and left it beside my little towers of money in an attempt to not be a dick.  “Excusez-moi pour les coins,” I wrote. An hour later, heading east at 110 k, I realized that what my note meant in English was, “Sorry for the corners.”  Atta girl Suzanne!

I got back on the highway, had gas in my tank, a song in my heart–even my hemorrhoid seemed happy. I stopped to make coffee at a rest stop, and instead of feeling irritated by all of the other travellers taking a break from the road, I felt a camaraderie. I watched one man walking through the area with a beautiful Bernese Mountain dog. I guess, in French, it would be a Bernaise. The man was calm. The dog was calm. I was calm. Coo-coo cachoo. My journey continued.

I watched my odometer tick up as I drove along the St. Lawrence River, and the lush farm fields of eastern Quebec. The road arched up and around the edge of Maine, and then dipped into New Brunswick. The landcsape reminded me of any Flintstones cartoon where the scenery repeated itself; it was beautiful, but there was a lot of it! The exposed metamorphic side-cuts displayed bending lines of rock that peaked out, and then hid under never ending forests–hours, and hours of forests. There were signs warning of moose all the way along. The danger of moose collision is riskier at night when the great beasts amble out onto the highway in the dark with their disproportionate legs, and heads so bizarre–like God had a go at photo shop. As much as I would have loved to see a moose on this trip, I had no desire to risk having one fly through my windshield, so I decided to be off the road before nightfall.

I arrived in Fredericton and tried to check into a hotel. When the clerk gave me the price, I wondered if there was some mistake. “No, it’s just me. I don’t need housing for my string of polo ponies,” I said.  I asked why the price was so high, and the clerk explained that, “it was because the hotel was so fully booked and that this was last minute.” “Last minute is a problem? Was the room not ready?” I wondered. Were there carpenters that were having to quickly build the room? Had the other occupants not paid enough, so I was having to cover the shortfall? Or, were the hotel owners simply taking advantage of me and being economically parasitic. Whatever the reason, I left and found another hotel with a less insulting rate.

The town of Fredericton was beautiful. I drove through it early the next morning, before most businesses were open, and it was at this time that I realized, “Once I reach Prince Edward Island, I will have driven across Canada!”

The thought of such an achievement put me into a bit of a fog. I began missing turnoffs. I got lost in Moncton. Have you ever been to Moncton?  I stopped to get my bearings and walked, like a zombie, into a fast food restaurant, as if I was going to order something, but then turned and left, overwhelmed by the lights and the smell. Nothing seemed real. Everything seemed absurd, with a side of chips.  I got back in the van, kept on, and then, around the middle of the day, crossed Confederation Bridge into Prince Edward Island. I had done it.

I’m still on the island as I write this. I have swam in the ocean, eaten lobster, oysters, and had the best chowder I have ever had.  Thank goodness for the Oh-for-Christ’s-sake, part of my psyche. Canada is a wonderful country–my favourite, and I have no regrets at all.