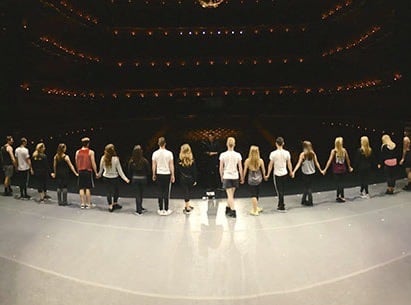 The one advantage of being on your own is that you are more prone to talking with strangers. This doesn’t mean that you can’t chat with a strange grandfather on a bench if you’re walking with your pal. Of course you can pause and comment on the lovely hat that the grandfather is wearing and ask him where he got it, and then catch up to your pal, still rambling on about how he hems his pants with duct tape now and saves a bundle in alteration costs. The thing is, if you weren’t with your pal, and on your way to irritate servers by ordering cobb salads without eggs, you could have sat down with the grandfather and learned that he used to be a hedge fund manager, but that what he really wanted was to be a dance captain on Broadway.

Everyone has a story. Not all of the stories are delightful, but they are a window into a different life from your own. I find the checkout lines at the grocery store often prime for the harvest of a good story and I avoid the self-checkout with this in mind. Once, a lady who was in front of me was commenting on her spouse who was suffering some medical challenges. We began talking, and I can’t remember exactly how the conversation went, but I do remember being astonished at the extent of, not only number medications involved, but also the terrible health of both people as she described to me her own difficulties. I remember wishing her well and that I hoped that she had support, but then silently, was thankful for my being gloriously free of ailments.

One of the funniest people I have run into so far, was an elderly lady, shortly before Christmas a few years ago. She was ahead of me in a busy checkout line and began shaking her head and muttering about some gift cards that she had to buy for some friends. “Fifty dollars each and not one of them is worth it,” she said. I started laughing. I commented on how crazy the whole season was and she agreed. She said, “One Christmas, when we were kids–there were three of us–we got one pair of skis.” She paused here, like a pro, and then delivered, “We didn’t even have a hill!”  I wanted to go hang out with her, because people like this usually have several good tales ready to share. They have that rare perspective on things that I adore, but the thing with the checkout line is that there are rules; it’s sacred. Never push it by following someone out into the parking lot. You’ll get arrested.

There are times though, when you don’t want to talk. For example, the middle of a concert is not the time to try to impress your neighbour with facts about how high you can jump, or the thing about hemming with duct tape, especially when you have to raise your voice to be heard above the music. This isn’t okay. This is considered pushing it. Years ago, I found myself at a Snarky Puppy  concert in Toronto’s Rex Hotel. I loved this newish, Brooklyn-based jazz/funk band and was keen to see them before they outgrew the Rex’s intimate stage, as they now have. I came solo, and had a seat at the far end of a central long, thin table, so in order to watch the stage, I had to lean ahead slightly and look to my left; the bar, which ran parallel to the table, was behind me. Everything was fine until the older man next to me mentioned something to his far seatmate, about a certain high school. I recognized the name of the school as the same as the one my then ex-husband had attended. Stupidly, I opened my face and asked the man if he knew my ex. He did. He introduced himself, and I recognized him as someone my ex had talked about having a great influence on his life.

It was at that moment when I wished for a time portal that I could have jumped into in order to extricate myself from the uncomfortable situation that I had made. The man talked constantly, first about how wonderful my ex was. I wanted to remind him that, though he was not a monster, the term ‘ex’ meant that it was doubtful that we would be sharing a romantic ice cream Sunday, or zipping off to the Caribbean together any time soon, but it was as if the man’s eyes were rolled back in his head and he could not hear for the telling. The band was playing and I was giving all of the physical clues that I could to hint about my wish to listen to them instead of to him. At one point, the man spoke about how “easy” it was for him to make music. He admitted that, no, he couldn’t actually read a score, but that it was no trouble for him to come up with a new tune in his head. He just needed someone else to, you know, write down the pesky notes and such.

I began to covet the long, bamboo skewer that the person across from me had removed from their hamburger. It now sat empty on the side of their plate, like a willing blade, well within my reach, and I wondered how many times I would have had to stab myself with it in order to find relief from this narcissistic hell I was in. I smiled. I nodded. I looked past. I cranked my head out and made it clear that I was all about the musicians, to no avail.  I sipped my beer and whimpered to myself, doing my best to keep the word “asshole” from loosening the place where it was, stuck in my throat with this man as target.

Michael League, the bandleader, announced that intermission was coming after the next song and I realized that I was under threat of having my whole evening ruined. The man blathered on about more of his astonishing skills. I nodded and smiled as per usual, but then, as if in a last gasp for sanity, I turned my head away from the man and around toward the audience behind me while pulling an eye roll that you could have seen from space. In that moment, all of the people seated at the tables behind me burst out laughing. Thank goodness. They had been watching, and oh thank goodness–I wasn’t alone in my misery after all.

Though I had missed half an evening of brilliant music, I felt vindicated in my frustration thanks to the response of that group of complete strangers–good people who had my back without me knowing it. They witnessed the sacred rule being broken, and you know, it was almost worth it. The annoying man loaded up his ego and departed. I don’t know if he realized that he was the reason for the mighty guffaw, and frankly–and though it doesn’t become me–I didn’t care. He likely went off to inflict himself on some other poor bastard by telling them that comedy was easy, that even without trying, he could make half of a jazz club howl.

The best thing about that night, aside from my excellent posse, was that the drummer for Snarky Puppy for that show, Larnell Lewis, sat down in the now-free seat beside me and ate a salad during the break. We chatted. He was delightful, but I could see that he was also hungry so I let him eat. I was giddy in my silence for him. I was then giddy in the glory of not being talked-at for the whole second half, and I listened to every single note. Yes, the man who had been seated next to me certainly had a story, but it wasn’t so much told in his words as it was in his obliviousness of the people around him. Generally, people like him are not happy in their lives, and find some kind of comfort in the sound of their own voice rambling on about their strengths. Was he secretly pining for his own version of that dance captain? We’ll never know, and I think I can speak for the whole audience at the Rex that night, when I say that we’re all fine with that.