I'll Just Hang Up My Coat 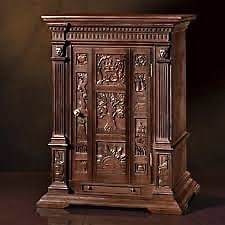 Around 1990, at the age of 27, I worked for a major film production house in downtown Toronto. The main office was in an old, Victorian house made office-functional, but instead of a built-in closet in the lobby, there was an enormous, imposing antique wardrobe set against the far wall where visitors could hang their coats. One summer day, I was wandering around with a pocket full of free time, talking to people during a lull in the activity. I found myself in the front lobby area which was vacant except for me and the receptionist. We chatted for a bit and then, as is required in such a scenario, I opened the door to the wardrobe, stepped in, and closed the door behind me with Narnia on my mind. I stood inside for some time, enjoying hearing the receptionist laugh–until she stopped. There followed the sound of footsteps and the voice of one of the directors, whom I recognized, and another man, whom I did not. “We can talk here,” the familiar voice said.

I heard the footsteps circle in the reception area and then I heard the sound of two medium-build bodies settling into two of the stuffed chairs close to me. The men began talking, initially going over pleasantries. I would not have been concerned if they had remained standing, but since they sat, I speculated that the discussion could run into more time than I was comfortable with, and more importantly, what if they began discussing sensitive material? “So-and-so is getting a big bag of cash for his latest work on the soft-drink line,” or, “So-and-so missed out on a big bag of cash by blowing the pitch for that soft-drink line,” or, “What’s in the bag?” I decided that I needed to get out of the wardrobe. I took a deep breath, opened the door, but instead of looking at the gentlemen in the chairs, I pretended to study the action of the wardrobe door and hinges like the pilot of a small plane checking a wing flap before takeoff. I stepped out, looked back into the wardrobe and carefully examined how the door closed and seated in its frame. I stood straight, wiped my hands together as if ridding them of dust, nodded to the two men, and announced, “Everything looks to be in order.” I walked out of the room at a gate which suggested that I might be on my way to file a report, and heard a welcomed chuckle as I rounded the corner to my desk.

In case you’re wondering, I didn’t get fired but I left months later, worn out from the repeated demands of precious ad executives on the catering department where I worked. There seemed to always be some artistic titan, wielding his universe-stopping talent around the buoying-up of, I don’t know–a sports shoe, or a new brand of beer, demanding a birthday cake made in the shape and colour of a Tuscan Cypress during sunset, for a meeting at 3pm, the demand coming at 2pm.  I don’t miss that. I did make a cheese tray for David Cronenberg who was neato and not of the demanding set– but now, in 2020 and all that that entails, I’d go back to that wardrobe in a heartbeat. I would be much more thorough in my search for the Narnian door, manic almost. Come-to-think of it, a secret door to a different land might be preferable­–one where there were no ice queens to avoid, and where themes of love and kindness weren’t set against stressful situations illustrating their rarity, their necessity. Why not discover an independent coffee shop perhaps, on the shore of Lake Superior but also somehow in the Canadian Rockies. I’d still like the change of seasons, but in this scenario, the environment would be ticking along as if the industrial revolution had been launched with wind turbines right from the beginning, so winter would be winter, and summer would be summer, instead of all of time being the backdrop for a slurry of heat-induced garbage weather, and the carnage and last-gasp patriarchal meanness that seems to be filling out the present reality set so delicately as it is on the edge.

Initially, I was going to try to list people I might like to have visit me in my new, geographically unstuck world. I thought about various authors, or perhaps characters from their books, but I’m not sure that sitting on the shore of Superior, watching the sun set with The Judge from McCarthy’s “Blood Meridian,” would be a good idea. The Glass family from J.D. Salinger’s work would be fun though, Seymour included please, and it’s doubtful that I would ever want them to leave, so they’re on the list. I considered real life acquaintances–there was a guy named Bruce, who took me back-country skiing near Nelson, BC, after I graduated from University. He seemed really nice, but I think that kind of curious pondering is a risk. He could have aged into some kind of gun freak with a tattoo of a tiger on his cheek. And what if he adored nothing but country music or howling saxophone jazz? I decided to let him go, content with the fun memory of us blasting through the trees down the side of that mountain.

Simply looking ahead might be the best idea. I’m sure I won’t be over-the-moon about everyone who steps into this refuge of a coffee shop, but that’s fine. There would be plenty of seating making forced confrontation unnecessary, but in this parallel climate-change-free world, the zeitgeist stress would be a thing of fiction anyway, so might miserable, judgemental people be just as implausible? I would set that as a requirement perhaps. Without even speaking, we would have coffee and location in common; that’s a good start. The rest, I would leave to chance, and of course, whether or not they chuckle as I come out of the fantastical side of the wardrobe to place my coffee order; humour would be essential.